Author and Pet – evidence from the 15th century!

At some long forgotten moment in history the species Felis Catus pulled off an incredible coup. It is coup that every species of mammal would surely have wished to achieve if only it could. There must have been a prehistoric age when cats lived wild, perhaps among the trees of the forest, eating whatever they could catch, and fighting each other off for hunting rights. Then one day came a moment of inspiration that would change feline history forever.

On that day a conversation among prehistoric felines must have proceeded along these lines: “Have you seen what the humans are building? Solid, comfortable, warm houses – furnished with surfaces and blankets and cushions – and full of food! Why don’t we live in those? We can employ some of the humans to make food for us in special factories. We can redeploy others to train themselves up in our anatomy so they can look after us when we’re sick. Let’s each find one of their houses to live in.”

That is, after all, exactly what they have done. It seems to me that very other animal has had to work its way in and earn its keep. We keep dogs to guard us, hunt for us, round up our sheep etc. We “look after” other animals in exchange for their meat and hides, or to pull our vehicles or drive our machinery. We keep other animals for milk or for eggs. So what was the deal the cats offered us in exchange for all their extra special perks? And they are special perks. Cows don’t get to sleep on their owner’s beds when they feel like it!

Some have suggested that the original deal may have been a vague kind of offer to catch mice for us. I take this claim with a pinch of salt. Frankly every cat who has ever house-shared with me, far from removing mice has actually brought mice into the house, only to toy with them for a few brief moments and then lose interest in them, leaving the terrorized rodents to wander off and find a place to hide. So, no, I am not convinced that mousing is the deal!

I reckon, if the performance of today’s felines is anything to go by, that the deal is simply that in exchange for this list of special privileges the cats will ever-so-graciously allow us to pat them and stroke them – if and when they are in the mood!To me this unique deal is a staggering achievement. Animals which might just as easily have been regarded as nuisances somehow persuaded human beings that this was a good deal for us! How privileged we humans are to allow such elegant and exquisite creatures into our lives! To this day that is the message that feline behaviour appears to convey. So why did human beings first accept this deal? And why after millennia of the reality of it do we still roll over and play ball for them? 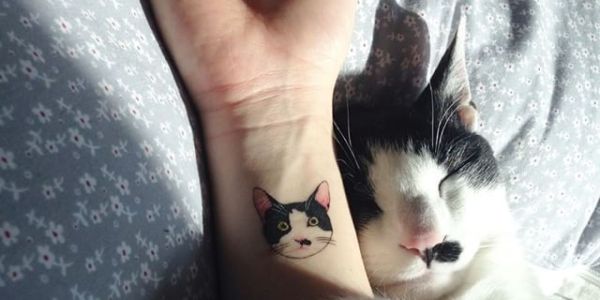 A happy cat with its South Korean owner – or should that be ownee?!

One possible answer lies in cats’ wonderful skills of vocalization. Current scientific concensus would have us believe that the feline brain does not house a sophisticated language centre like that of the human brain. This may or may not be so. But what certainly cats can do is make vocalizations which have profound emotional effects on human beings. In fact, a correspondent of mine, whose PhD thesis was on feline vocalizations, told me that there are particular sounds that cats all around the world only make to human beings. Cats can growl, trill, caterwaul and hiss at each other, and can even bark. But the sweet, high-pitched “Meeeeeee-aow” and “Meeuw” sounds; cats only address those to human beings!

Have you ever considered why these unique, human-aimed vocalizations work so well in getting us to gently do a cat’s bidding and so attend to its every little need and preference?

I have a theory: Have you ever noticed how much a cat’s loud meeeow can sound like the cry of a baby? I happen to believe that this is no coincidence. I have a feeling that another prehistoric feline “conversation” may have run something like this: “Have you noticed how the humans pamper their babies? Now just watch watch what the humans do when I make a sound like one of their babies! Look here comes one now!!” One way or another, maybe through trial and error, cats worked out how to make sounds that switch on our compassion glands!

In the time since I believe that both species (human and feline) have learned to tune in to each other’s communication modalities a little more profoundly. Sometimes I feel that my two cats only resort to meaowing when we have missed the telepathic and body language signals they have sent us as their default method. That level of connection is the result of long years of training of us by our feline guests – or is it hosts?! I am only half-joking when I say “hosts,” because I now realise that my tom cat takes his own job very seriously. He protects the land on which my family lives. If the land is his then the humans on that land are his – and he is theirs. He may not have purchased the land, nor maintain the mortgage, but in his mind my tom cat proudly keeps our land ours and respected by the other wildlife.

It is fair to say that the scale of this feline coup does vary from culture to culture. Cat ownership is not strong in most African countries, while in ancient Egypt they were venerated as Gods.

Looking at things from a human perspective, have we been conned? I don’t think so. My reckoning is that if this deal didn’t work for us humans it simply would not persist. Perhaps the fact that we give cats so much in exchange for their offer to live in our homes, eat our food and be cared for, patted and stroked, might indicate just how important companionship, compassion, affection and touch really are to human beings. (Indeed the health benefits of cats for isolated elderly people are now matters of serious study.)

In summary, the unique and amazing deal that cats have struck with us is really something quite profound. For in allowing companionship, affection, compassion and touch into our lives our feline friends actually serve to make us, as result, a little more human. Perhaps that is their gift to us.

P.S. If you’d like to know more, here’s something from PBS Eons…