In the new landscape of post-reformation society European believers found themselves compelled by state powers to attend and have their babies baptized into the church of the state’s choosing – whether Roman Catholic or reformed. Pastors were appointed by the state and Christians could find themselves drafted into the local state militia to fight other Christians for state wealth and territory on the command of their secular or religious authorities. Penalties for failing in these civic-church duties could result in severe penalties from fines, to being locked in stocks and pillories, to eviction, dispossession, imprisonment and execution.

Even in this harsh climate, from the C16th onwards Christians began to group together who believed that church attendance should be the voluntary expression of faith and community among genuine believers. The believed that baptism lost its meaning if it were not voluntary. They believed in freedom of religion, namely that a family should be able to choose its own faith, whether Catholic or reformed, state church or independent. They rejected the idea that bishops could force Christians to kill other Christians, seeing such violence as completely contrary to the Way of Love which they found in the Gospels. This dissent is the historical root of the pacifist movement and the tradition of non-violent resistance.

They believed what Martin Luther had written in his preface to the first German Prayer Book – namely that the transformational “one-another” teachings of the New Testament could only be practiced in small, self-selected groups of believing friends – what we might call a “simple cell”! This led to their practices of membership, exclusion and inclusion. They saw corporate worship, confession and the communion as gifts to be given voluntarily by believers freely gathering together as the Church – not as obligations and duties. They also believed that churches should be free to choose their own ministers, not have them imposed by secular authorities. 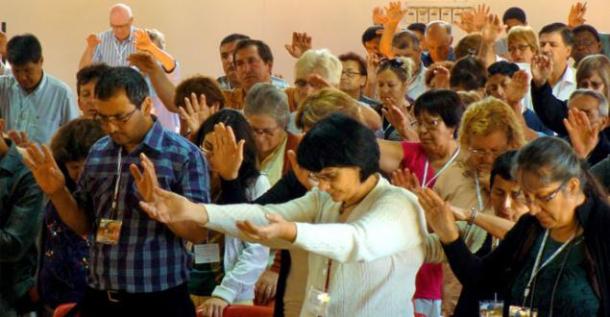 Chilean Anabaptist Believers in 2013
praying for a pastor

The faith of these groups was focussed on spiritual formation. They did not think of faith in Christ as having brought them into a static fold. Rather they spoke of Jesus as their “leader” or “master” and of their spiritual practice as “Nachfolgen” – which meant a journey, a following after Jesus, their master.

Today these beliefs would seem unremarkable and rather obvious. At the time, whether you lived in a Roman Catholic region or a reformed district, holding such beliefs as those could mean in some places that your business would be shunned, that you could not hold public office, or find property to rent or customers for your produce. Across Europe such believers often found themselves forced to migrate to other countries in the hope of finding land they could rent or buy in order to make a home for themselves and live, un-persecuted. Hence the Moravians (renowned for their power in prayer and in the Holy Spirit) moved from Slovakia to Germany, and the Aamish (renowned for their simplicity of life) to North America. 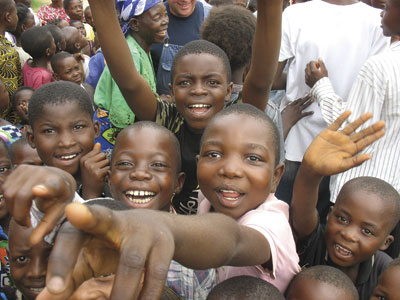 21st Century children of the Anabaptist,
Mennonnite and Hutterite diaspora

Such forced migrations continued for over a century and spread this form of Christianity around the world as believers were granted asylum in new countries. The collective name for these groups was “Anabaptist” (a reference to their general practice of voluntary/believers’ baptism.) The Anabaptists’ regard of the New Testament as something more than an aspirational document, and their intentional approaches to shaping their lives around the teachings of Jesus were mocked by wider society and earned them the derogatory label of “new monastics”. Since the monastic world had been the theological wellspring that brought reform to the churches in the first place, it was a label that left Anabaptists unworried.

In Britain believers with similar convictions were called “Separatists” (a reference to the principle of separating state and church powers.) A British pastor, Thomas Helwys, traveled with a group of separatist believers to the Netherlands, where they spent some time learning from Anabaptist communities and from the first Baptist congregation, established in Holland by Pastor John Smyth . Thomas Helwys returned to Britain in 1612 and established the first Baptist congregation at Spitalfields in London.

Over the next 45 years this single Baptist congregation had been joined by another 300 across the country using the Baptist name. Like the Anabaptists, Baptist pastors often found themselves persecuted by the conjoined powers of state-church and state. Many Baptist pastors, including the famous writer John Bunyan, were put in the stocks and imprisoned. One of the few images we have of Thomas Helwys shows him in a nick iron being led to prison at the pleasure of His Majesty King James (yes, the King James of the Authorised, King James Bible.)

The groups which began to proliferate under Baptist and Congregationalist banners generally began as friends with similar convictions sought each other out and formed what the Simple Rule calls a Simple Cell. These generally began by sharing together in an agreement. Sometimes it was informal. But many times the agreement was expressed as a “pledge” or “covenant”. In 1606, Congregationalist Pastor, Francis Johnson, wrote, “A pledge is…made to the Lord and with one another, to walk together in the truth of the Gospel and to forsake and avoid whatever is against it.”

One such group which met London began in 1616 when, “they joined hands together in a [circle] and covenanted to walk together in all God’s ways as He had revealed or should make known to them.” There again is that spirituality of Nachfolgen! In Axminster a congregation began in 1650 when the members“solemnly covenanted and engaged to walk together in the faithful discharge of their duties towards God and one another” and raised their right hands as the sign. The continual theme is one of journeying or walking together.

The work of Baptist Pastor John Bunyan in his poetry/hymnody – and supremely his work “Pilgrim’s Progress”– gives us a flavour of their spirituality. They regarded spiritual formation as a journey of growth and regarded it as the task of every believer.

This was in stark contrast to a vision that was endemic both in reformed state-churches and in the Roman Catholic world which tended to depict believers as helpless sinners, totally dependent on the essential medicine of a “sacrament” that only the state-tied, state-appointed and/or episcopally ordained priests and ministers could dispense. In this way both participation in “church” and access to eternal salvation were tied to subjection to an essentially feudal civic order. Separatists, Anabaptists, Baptists and Congregationalists were the dissenters from that feudalized view. This is why church, communion and confession were seen so firmly as freewill expressions of gratitude and worship. It is why the “priesthood of all believers”, the churchood of the family and the sanctity of all life, were so vital to their theology and practice.

Theirs was a faith that saw the whole of life as sacred. They did not separate life into sacred and secular, believing that the church-hood of the family and the priesthood of all believers was the bedrock of the New Testament Christianity. For them the calling of a teacher, a milliner, a farmer or a merchant was every bit as “holy” as the call of a priest or bishop. How they conducted themselves in the world was the measure of Christian character, not immersion in in-church piety. With such a whole-life theology it is perhaps not surprising that these groups produced industrialists, philanthropists, social pioneers, founders of the missionary movement such as William Carey, enduring authors like Elizabeth Gaskell, and timeless preachers such as Charles Spurgeon. Wonderful fruit from a practice centered in the life of self-selected groups of friends agreeing to walk together in spiritual formation!