THE 1936 ABDICATION CRISIS – PART THREE – LETTERS FROM A CORNER

75 years after the events of 1936 a number of private letters between Wallis and Ernest were released to biographer, Anne Sebba. These deeply personal letters squarely confirmed the impression I have outlined in the post above.

Though often referred to, rather pejoratively, as a “twice divorced American socialite” the fact is that when the Prince of Wales’ ardor landed on her, Wallis had been once divorced – and that from an alcoholic husband, who by all accounts was a rather unpleasant and abusive man. Wallis was then happily married to her second husband, the ship-broker Ernest Simpson.

As Prince of Wales, Edward had previously made a mistress of Freda Dudley-Ward, who was then married to her second husband the Rt.Hon William Dudley-Ward MP. Mrs Dudley-Ward was followed by the half-American Thelma Furness, who was at the time married to her second husband, Viscount Marmaduke Furness. Evidently the Prince found himself attracted to other men’s wives – and specifically women on their second marriage. Especially Americans.

From every account it is clear that the initiative to turn his affair with the already married Mrs Simpson into her third marriage came entirely from Edward. We now know that Ernest Simpson agreed to give Wallis a divorce only after he had confronted the King for a personal assurance that the King genuinely intended to marry Wallis and that he would not, under duress, leave her stranded and ruined. Glossing over the rather ugly detail of what arranging a divorce meant back in 1930’s England, the King simply insisted on what he believed Ernest ought to have worked out for himself – namely that he had no intention of being crowned without first marrying Wallis.

Six weeks before the abdication, as divorce proceedings between Wallis and Ernest were about to commence at the Felixstowe Assizes, Wallis wrote a poignant letter to her husband Ernest saying, “I am terrified of the Court etc. I feel small and licked by it all. I can’t think what sort of mess I am leaving for. Am sorry for myself. Am sorry for the King. I hate stuffy British minds. And last but not least I don’t understand myself, which is the cause of all the misery. Love Wallis. PS I am so lonely!”

One month before the abdication, while the petition for divorce was working its way through the courts in Suffolk, Wallis wrote again to Ernest. In a letter dated October 30th she wrote, “What can I say when I am standing beside the grave of everything that was us. I can only cry as I say farewell and press your hand very tightly and pray to God.“

Wallis in more innocent days in Baltimore in 1927

Following the Simpsons’ divorce and the King’s abdication Wallis and Edward were separated for three months, Wallis in France and Edward in Austria. During this time Wallis was still corresponding with her former husband. “I miss you and worry about you…You are so good and sweet. My dearest love to you,” she wrote.

Ernest in turn wrote to Wallis, “I want you to believe – and I do believe – that you did everything in your power to prevent the final catastrophe. And you may rest assured that no-one has felt more deeply for you than I have.”

Given that these letters were carefully kept private for a full 75 years I am inclined to believe in their sincerity.

The theme of mutual care and regret did not disappear from Wallis and Ernest’s private correspondence for a full two years. It would appear that, just like Uriah and Bathsheba in the annals of Jewish history, Wallis and Ernest had discovered too late in the day the dangers of living too close to a king’s palace!

Yet, despite the regrettable, messy and emotionally unequal beginning to their relationship, Wallis and Edward were able to forge a happy and life-long partnership. From the moment of the King’s abdication the Duchess’ job was to recreate for her husband a royal sense of significance, and to substitute hers for the love of a whole commonwealth. It was a gargantuan expectation to fulfill – and a fact which she names subtly in her 1955 autobiography and openly and in her letters to Ernest from 1936-1938. Wallis knew she had to make the situation work. And this she did – and did for the next 36 years until Edward’s death from cancer in 1972 aged 78. 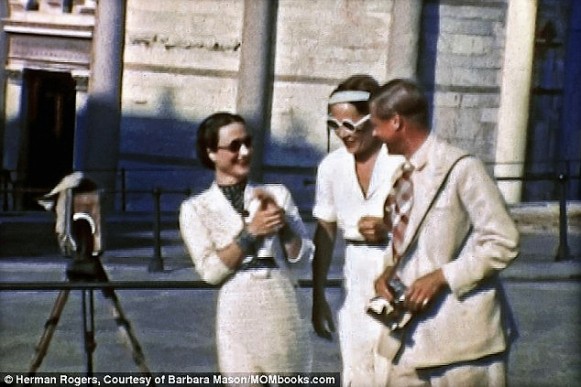 The Duchess, her lifelong friend Katherine Rogers and The Duke in 1938

Notwithstanding the ups-and-downs and bumps in the road that are the stuff of any lasting relationship, even the harshest critics among the Duchess of Windsor’s peers (which included her sister-in-law, Queen Elizabeth the late Queen Mother) credited Wallis with success in making the Duke a very happy married man.

The Duke and Duchess, partying in the 60s

If the Queen Mother, whose hatred toward the Duchess was an open secret, could credit Wallis with making the Duke’s life a happy one, I am skeptical of commentators further removed who prefer to paint a grimmer, more Machiavellian picture. (Again you can read the scenes for yourself in the videos below.)  Yet fascination persists to this day around Wallis’ precise intentions.

The current Prince Edward produced a documentary (below) which examined the story of his Great Uncle and Great Aunt. Though far from uncritical of his Great Uncle,  it is noticeable that Prince Edward distances himself from the official canon which cast the Duchess as a mischievous and ambitious social-climber – a kind of 20th century Becky Sharpe, who manipulated the Prince, being determined at all costs to attain the British Crown. 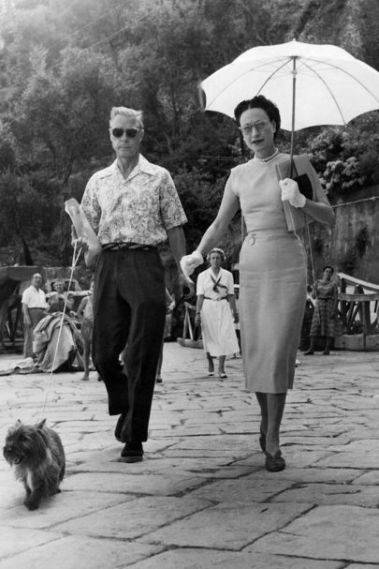 The Duke and Duchess in Portofino in 1951

Some of the often repeated claims about Wallis give the appearance of Establishment efforts, post-abdication, at re-positioning Edward VIII in the public imagination. These claims ranged from casting Wallis variously as a German spy, a Nazi agent, a serial adulteress, a seductress trained by a Chinese prostitute, a lesbian, inter-gender or even a man! The novelist Barbara Cartland (later step-grandmother to Princess Diana) summarized what she regarded as the essential problem with the Duchess of Windsor, describing her as “aggressively American!” 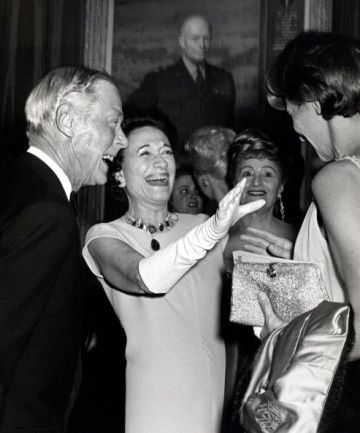 Click here for the next chapter and for videos and interviews