As crisis loomed, Wilson and Gwyer’s Queen Mary + Prince George of Kent proposal fell by the wayside. It had been pre-empted by a series of meetings through the second half of 1936, convened by Prince Albert and Princess Elizabeth, which included PM Stanley Baldwin, and Archbishop Lang – quietly preparing the way for Albert’s accession to the throne. Prince Albert would be the one to be transformed into the new  King George that the country needed.

Edward’s official, authorised biographer, Philip Ziegler, identifies Balmoral in the Summer of 1922 as the context of Edward’s first clear intimation that he intended to avoid or abdicate the throne. It is therefore entirely possible that private conversations involving Prince Albert and his future in-laws, the Bowes-Lyon family, had anticipated Edward’s abdication by some considerable time – conceivably even preluding Prince Albert and Elizabeth Bowes-Lyon’s engagement in 1923.

In April 1920 King George V put an emphatic stop to a relationship between Prince Albert and a married woman – an Australian by the name of Sheila Chisholm. At the time Sheila Chisholm was married to her first of three husbands – Lord Loughborough. Unlike his older brother in the following decade, the young Prince Albert dutifully obeyed his father’s instructions and ended the relationship.

In the Spring of 1921, as an eligible and now available bachelor, Prince Albert made his overtures to Elizabeth Bowes-Lyon. Lady Elizabeth was friendly with two of the King’s sons – Prince Albert and Prince Edward. Elizabeth accepted Albert’s proposal – but not without demurring. When Albert first proposed to Elizabeth in the Spring of 1921 and when he proposed a second time in March of 1922 it would seem that Elizabeth’s stronger interest lay elsewhere and she declined the extremely handsome Prince, who was then second in line to the throne. Quite a thing to do.

It was not until January 15th 1923 – three short months after the royals’ summer in Balmoral with its intrigues over Edward’s hinted early retirement – that Elizabeth finally found herself minded to accept Albert’s proposal after all, on his third time – and third year – of asking! What, one wonders, had changed? 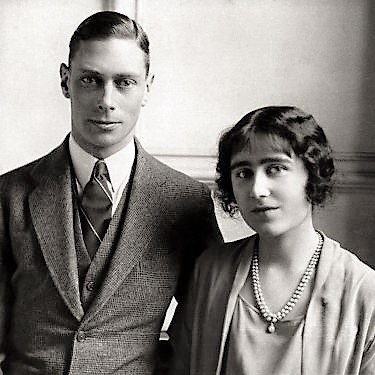 When the two married in April the same year, Albert was joining his life with a person who could hardly have been more enthusiastically suited to royal life.  In fact friends and family had referred to Elizabeth Bowes-Lyon as “Princess Lilibet” from her early childhood!

In 1926, three years after their marriage, and at Elizabeth’s instigation, Albert began regular speech therapy with Lionel Logue to address his nervous stammer. King George V was sending Albert on a six-month tour of the Empire, which would necessitate dozens of speeches – the very last thing to which Albert was suited. Albert’s program of speech-therapy serendipitously prepared him for what were to be the demands of kingship in the new age of radio and newsreels. So it was that when the abdication crisis eventuated, ten years later in 1936, a ready royal alternative to Edward had been thoroughly-prepared.

I do not believe that Prince Albert’s machinations emanated from any ambition to jockey Edward out of the way. Quite the opposite. As his accession to the throne approached Prince Albert wrote grimly that he felt “like a lamb being led to the slaughter,” and I believe his words were utterly sincere. Eyewitnesses credibly describe Albert on receiving news of his accession, experiencing the same anguish that his brother Edward had shown in his turn.

The Yorks provided a reassuring image of family and stability

Yet once crowned as the new King George, no one would deny that Albert absolutely rose to the needs of the hour and was loved as a sympathetic, steady and impressive monarch. It was clear that Albert, no less than his older brother Edward, suffered  a legacy of frailties arising from their father’s overbearing approach to parenting. But in Elizabeth Albert had found the perfect companion and complement. Together they projected strength, stability and the virtues of a happy family. And by every account Elizabeth, absolutely thrived on being Queen – a title which, unprecedently, she never gave up.

After the death of her husband George VI, Elizabeth rejected the tradition that would have styled her “Dowager Queen.” Accordingly royal protocols were changed to make Elizabeth “Queen” for a full 66 years (1936-2002) – Her Majesty Queen Elizabeth, the Queen Mother.

Suffice it to say, neither PM Stanley Baldwin nor the Palace found it necessary to delve any further into other accession possibilities. The Queen Mary – Prince George of Kent solution was not needed. And the Establishment would find other ways of managing the embarrassing level of public goodwill towards Edward, once he had gone.

Click here for the next chapter and for videos and interviews